In the early 1900’s, there was a tin pail of lard in nearly every kitchen in America.  Lard was the universal shortening.

The demise of lard began in 1906, when Upton Sinclair published his book, The Jungle, which exposed the gruesome reality of the Chicago meat-packing plants.  Sinclair claimed that workers would sometimes fall into the boiling vats of lard and became part of the product.

The Jungle was a work of fiction, and President Teddy Roosevelt called Sinclair a “crackpot” who was “hysterical, unbalanced, and untruthful.”  Nevertheless, Sinclair set the stage for a bold new competitor to lard.

Around this time, William Proctor and James Gamble realized that the rise of electric lighting was about to put their candle-making company out of business.  But Proctor and Gamble made a key scientific breakthrough:  they discovered that hydrogenating the process to make their cottonseed oil candles would turn the candles into a white, lard-like substance.  They called this invention Crisco vegetable shortening (the vegetable was cotton).

Proctor and Gamble launched Crisco in one of the brilliant marketing campaigns of the 20th Century.  P&G positioned Crisco as a new type of food, clean and pure, a product of science, healthier and safer than lard.

In 1912, P&G released a beautifully-written and gorgeously-illustrated cookbook with hundreds of recipes using Crisco.  This cookbook, The Story of Crisco, was printed in numerous languages to target niche ethnic markets.  Jewish homemakers in particular were early adopters of Crisco as a kosher product.

P&G gave away the cookbook with their product and mailed it all over America, which was a very big deal at the time.  The Story of Crisco was treasured by early 20th Century homemakers and stands to this day as a monument to food marketing genius.

P&G paid celebrity chefs to lead cooking classes featuring Crisco to establish the credibility of the brand.  The company claimed in advertising that Crisco would instill good moral character in children.  They paid scientists to produce research that supported their health claims.  Crisco hammered away at the health theme for decades.

Crisco was a pioneer of print media during WWI, radio in the 1920’s, and television in the 1930’s.  The dual marketing strategy was to promote the purity of Crisco while subtly undermining lard.

The lard industry, controlled by a consortium of good old boys, mistakenly believed they held an eternal monopoly on shortening.  Lard industry leaders failed to recognize the threat from Crisco in time, or to successfully defend and promote their product.  Lard was demonized to the extent that even today the word lard itself invites disgust.  Eventually, Crisco completely replaced lard in the kitchens of America.

Crisco’s product health claims were seriously challenged in the 1990’s when scientists revealed the truth about trans fats.  Despite numerous product reformulations, Proctor and Gamble divested itself from the Crisco brand in 2001.

The Crisco campaign of the 20th Century was enormously effective in shaping attitudes and beliefs among consumers.  Lard, a wholesome product that had been loved by Americans for centuries, was utterly destroyed in the marketing arena by an imitation food that was created in a lab and manufactured from cotton.

Modern food companies are even more sophisticated and more effective in their food marketing messages.  We are bombarded constantly with these highly compelling messages.

As a consumer, it can be difficult to know what to believe, to know the real story behind the advertising.  But the closer we eat to home, to local farms, and to our own backyard gardens, the easier it is to know the truth about our food.

(I found the following vintage advertisements for lard on the site ecofriendlyfreckles.com.   It is no wonder lard lost the advertising war!) 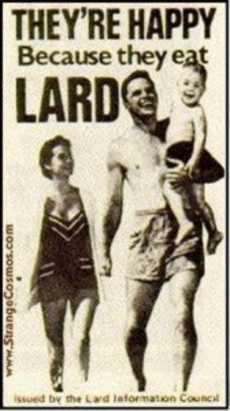 All You Need is a (LARGE) Spoonful!