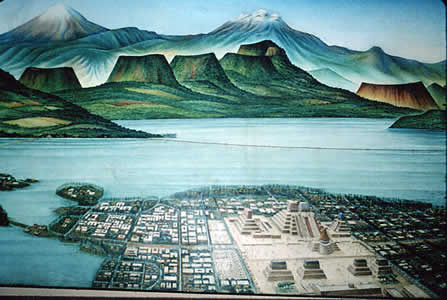 Tenochtitlan,, the Aztec Capital, a City on a Lake (Image courtesy uncp.edu)

When Cortez discovered the Aztec Empire in 1519, he found a spectacle of human sacrifice shocking to behold. Human captives were marched by the thousands up the stone steps of the pyramids, and at the top, their hearts were cut out and roasted in a fire. The heads were chopped off and flung with the bodies over the side.

Cortez saw women on the temple floor mixing amaranth grains with the rivers of blood. This bloody paste was shaped into statues of the sun god and eaten by the Aztecs as a delicacy.

Amaranth was a staple food crop of the Aztecs, as important to their civilization as corn or beans. Amaranth is a super food. It is easy to cultivate, and the grains contain more bio-available protein than soybeans or even milk, while the edible leaves are rich in iron and vitamin C.

Each year, Montezuma received more than 20,000 tons of amaranth grain from Aztec famers as tribute for the human sacrifices.

For Cortez, the ritual eating of amaranth and blood was a savage mockery of the Christian communion, the symbolic taking of the spirit of Christ. When Cortez seized control of Tenochtitlan, he outlawed the production of amaranth under penalty of death, and he promised to personally cut off the hands of anyone he found growing it.

A long list of globally important food crops flowed from the Spanish conquest of the New World: corn, tomatoes, potatoes, chocolate, and many other foods. Amaranth had the potential to be as great as any of these, but because of those blood-soaked statues of the Aztec sun god, Huitzilopochtli , a valuable food crop was nearly wiped out of existence. Cortez burned amaranth in the fields and ground the grains beneath his boot heel, to stamp out the seed forever.

But some of the seeds survived, and amaranth was kept alive by Native Americans in secret hidden gardens. Finally, 400 years later, amaranth emerged once again into great fields of purple, this time in far-away India and Africa.

Next week, we will explore the bright future of amaranth, five centuries after the Conquistadors faded into history.